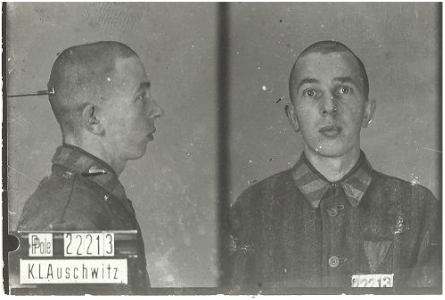 (Feb. 24, 2009)  Much of the information given the public about the Holocaust is often unreliable and even fraudulent, according to a Polish Catholic who spent over three years as
​a prisoner of Hitler's SS in the dreaded German concentration camp at Auschwitz.

"Nowhere else is Holocaust history as distorted and as misrepresented as it is about Poland," says Michael Preisler who has been trying to set the record straight for nearly twenty-five years.

One way he does it is through the educational efforts of the New York-based Holocaust Documentation Committee of which he is a founder. The group is part of the Polish American Congress.

Holocaust deniers have always been around misleading everyone with their special kind of Holocaust dishonesty. What troubles Preisler most is that some of it is coming from sources expected to be trustworthy and objective. "It's now become worse than ever," he says.

Preisler was a teenager living in Poland when World War II broke out with the German invasion of his country in 1939. He quickly learned how brutal and bloody the German occupation could be and how much the Christians and Jews of Poland would have to suffer.

Determined to fight the Germans in every way he could, he joined the Polish underground resistance, the largest and most effective resistance in all of German-occupied Europe. Unfortunately, the Gestapo caught up with him for his anti-Nazi activities, beat him and then shipped him out to Auschwitz.

It's no wonder Preisler got upset a few weeks ago when a Protestant minister in Springfield, Missouri made false accusations against the people of wartime Poland, a predominantly Catholic country. They were published in a local newspaper, the Springfield News-Leader.

The Protestant pastor claimed "Germany and Poland orchestrated the Holocaust" and the majority of Jews died in Poland "at the hands of their Christian neighbors and countrymen." As preposterous as these charges were, the paper printed them without any challenge or question.

This is not the first time Preisler has witnessed such outrageous anti-Polish and anti-Catholic falsifications made by some irresponsible Protestant clergy.

"The same kind of nonsense" appeared several years ago in a book authored by a well-known TV evangelist from Texas. "He was very kind and forgiving to the Germans who ran Auschwitz where the largest number of victims were Jews and the Poles were second largest. Instead of blaming the Germans, he wrote that Poles like me were responsible for the ovens of Auschwitz," said Preisler.

The Texan backed down and promised to remove the falsehoods from the next edition of his book after Preisler kept hounding him and admonishing him for "bearing false witness."

Current Holocaust commentary has begun to brazenly reveal what Preisler suspects is "a disturbing and growing anti-Catholic bias" which disguises its underlying religious prejudice by picking a prominent Catholic country like Poland as a target for unfounded and malicious accusations.

Because clergymen are authority figures for many individuals, Preisler believes their statements - and their misstatements -are usually accepted as credible. This is why he says this latest misrepresentation is of so much concern to him.

Preisler admits the possibility the Missouri pastor may have spoken out of pathetic ignorance rather than evil intent. And that raises the question: Who gave him such misinformation? Who lied to him?

On the chance it may have been ignorance, Preisler had his Holocaust Documentation Committee send a copy of "The Forgotten Holocaust - The Poles Under German Occupation 1939-1945" by Richard Lukas to the Springfield News-Leader.
The Committee asked the editors to read the book and pass it on to the pastor "to give them and the pastor the historical truth which they have shown to be so glaringly absent from their understanding of the Holocaust and the terrible tragedy the Jews and Christians of Poland shared together."