Nazi Germany invades Poland
The 1939 siege of Warsaw by Germany was the beginning of a horrific, five and a half year nightmare experienced by millions of ethnic Poles (mainly Christians), and millions of ethnic Jews. Unfortunately, most Westerners still do not know about the terror, suffering, and death experienced by Christian Poles during the German occupation of Poland in World War II. The archival footage of Julien H. Bryan gives us a glimpse of what the Poles experienced as Nazi Germany began to enslave the Polish population. ﻿ 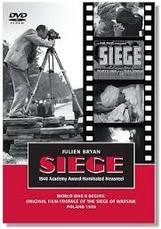 Arriving in Warsaw a week after the Nazi German invasion of Poland, American photojournalist Julien Bryan was the only neutral reporter who remained in the city. He survived two weeks of devastating bombardment risking his life over and over again to record the agony and bravery of Warsaw's civilians under the merciless German attack. Mr. Bryan's film and still photos of the Nazis tragic destruction of Warsaw shocked the American public into awareness of the devastation of modern warfare, and the looming danger as the Nazis conquered country after country. Nominated for an Academy Award in 1940, and inducted into the U.S. National Film Registry in 2006 for preservation as one of the nation's most culturally, historically or aesthetically significant films, this rarely seen historic newsreel Siege has been lovingly restored and is now available on DVD for the first time. Aquila Polonica is pleased to offer this special edition of Siege, which includes additional Special Features in the nature of text and still photos, as well as an historic audio essay by Julien Bryan entitled Friendship Is a Passport, recorded for Edward R. Murrow's "This I Believe" radio series in the early 1950s. DVD run time: 10 min. >> 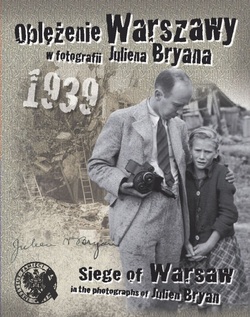 The book is the first such extensive and comprehensive presentation of the Julien Bryan’s work. Its main theme is the siege of Warsaw by the German army in 1939, and most importantly - the fate of the residents of the Polish capital, as seen by the American photographer. In addition to a wide selection of photographs, there are Bryan’s reportages, translated into Polish for the first time: Siege of 1939, and Warsaw revisited of 1959. We also present the accounts of Poles who helped Bryan:On the ruins of Praga,a radio speech given by Cpt. Władysław Polesiński and Warsaw in September with Julien Bryan,reminiscences of Stefan B. T. Radliński. Introduction by Jacek Sawicki and TomaszStempowski’s essay are a contemporary attempt to show the work of the American photographer in a broader historical context.

﻿The attached DVD contains the film Siege of 1940, from the archives of the Filmoteka Narodowa [National Film Archive],
and the transcript (with the translation) of a Julien Bryan’s speech on the Polish Radio recorded on September 16, 1939.﻿