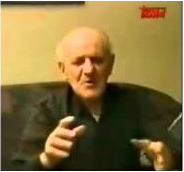 The eyewitness who got close enough to get a good look at German soldiers burning down
​a barn full of Jewish men, women and children during World War II died July 3rd in a New York City medical facility after remaining in a coma nearly a year. The atrocity he observed took place in the town of Jedwabne, Poland on July 10, 1941.

Boleslaw (Apolinary) Domitrz was 75 at the time of his death. He came to the U.S. from Communist-controlled Poland and resided in Greenpoint, Brooklyn (N.Y.) for over 20 years.  With the Communist system in Poland collapsing in 1989, he intended to return back home and spend the rest of his retirement years in the place he was born.

In June last year, he met with the Polish American Congress to say goodbye to the organization's leadership. Just days before his departure, he suffered complications from an existing heart condition. A subsequent stroke left him immobilized until the day he died.

Domitrz gained prominence in February, 2002 when he confronted NYU Prof. Jan T. Gross at a lecture sponsored by the City University of New York. Gross, a Jewish immigrant also from Poland, was there promoting his new book, "Neighbors,"  a slanted account about the same barn-burning atrocity Domitrz personally witnessed when he was just 12 years old. Gross sensationalized that incident by trying to claim the Catholic half of Jedwabne's population were the ones who incinerated the Jewish half of the town and not the Germans who invaded there.

Despite his weakened physical condition at the time, Domitrz felt a moral obligation to attend Gross' lecture and make sure the audience there would hear the truth.  Gross was accusing Polish Catholics of something exactly opposite from what Domitrz clearly saw that terrible day in 1941.

Before he ever came to America, Domitrz learned how it was to live under Communist and Nazi brutality and repression. He knew how maliciously anti-Polish much of their propaganda had been.  And what could be more malicious, Domitrz felt, than to whitewash the German atrocity at Jedwabne and try to shift the blame for it to Hitler's Catholic victims in Poland.

Putting people into buildings and burning them was a common technique the Nazis used in various countries they occupied.  One such barbaric extermination of human beings took place in Michniow , Poland on July 12-13, 1943 where the Germans herded Poles into barns and houses and burned them alive for helping a Jewish partisan unit.  Over 200 people died, including 70 children.

Gross appeared stunned when Domitrz stood up in the packed auditorium during the question and answer period and started speaking in Polish and telling him he was wrong for blaming the Catholics of Jedwabne for what the Germans did.

There are other eye-witnesses to the barn burning still living in Poland who also dispute the accusations Gross makes.  But it had to be a shock to Gross and everyone else in the audience to see someone like Domitrz - right in the very heart of New York City - get up and start challenging the integrity of his book.

Domitrz described how he and two boyhood friends were in a field near the town and saw smoke rising from the burning barn.  Out of curiosity, they ran toward the fire until they were in a perfect position to observe the entire scene.  One thing was sure.  There were no Poles around.  Everyone seemed to have disappeared indoors as if from some
dreadful and ominous fear.  The only persons the boys saw around the burning barn were Germans in uniform, holding machine guns and with their dogs.  Nobody else.

"When we realized we were the only Poles out there", Domitrz said, "we were so scared the Germans might see us and throw us into the fire that we turned around and ran right back as fast as we could."

Although Domitrz never recovered from his stroke, some of his testimony has fortunately been preserved for the historical record. Before his health deteriorated so abruptly, the Polish American Congress was instrumental in taping an interview with Domitrz in which he gave an account of his experience regarding the burning of the barn.

Titled, "Jedwabne: What is Truth?",  Domitrz and other eyewitnesses to German murders of Jews elsewhere in Poland recall what they saw. Commentary from Dr. Jan Moor-Jankowski and Prof. Iwo Pogonowski is included and provides a scientific and forensic prospective to the Jedwabne incident.  At this time, only a Polish-language version of the video or DVD is available from the Polish American Congress.

What Boleslaw Domitrz fervently believed was his moral obligation to speak out and tell the truth about Jedwabne is now documented and preserved as part of the permanent record.