Wednesday, 9 December 2015
Hanukkah candles lit in the window of the Presidential Palace 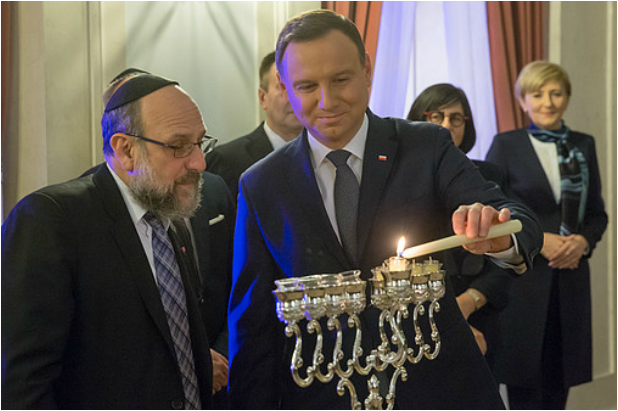 Hanukkah is one of the most joyous Jewish holidays. It is celebrated in commemoration of the victory of the Jewish People of Maccabean Revolt over Greeks in the 2nd century B.C., the cleansing and the rededication of the Jerusalem Temple. The name is derived from a Hebrew verb: chanach , meaning to dedicate, to inaugurate.

For eight successive days, every evening Jews light one candle on the Hanukkah nine-arm chandelier: chanukiah.  On the ninth additional holder of the chandelier a shamash is installed: the candle from whose flame all other candles are lit. The chanukiah should be placed in the door or at the window.

The Festival of Lights is celebrated as universal symbol of respecting tradition, peace and freedom. This year, it has commenced on December 6.

The ceremony in the Presidential Palace was joined also by the Ambassador of Israel to Poland, the Chief Rabbi of Poland and representatives of Jewish religious, social and cultural institutions and organizations in Poland.

The tradition of kindling the Hanukkah candles by the Head of State was ushered in by President Lech Kaczynski. The first such ceremony was hosted in the Presidential Palace on December 18, 2006.