Please help us reveal the real cause of the 2010 Smolensk plane crash?
Write a letter to your senators and to your representative in Washington D.C., and ask them to call on Congress to hold public hearings regarding the 2010 Polish plane crash in Smolensk, Russia which killed the president of Poland and 95 other people.
”The only thing necessary for the triumph of evil is that good men do nothing” - Edmund Burke

On April 10, 2010, Polish President Lech Kaczynski was killed in a plane crash together with his wife Maria, and 94 other prominent political, military, social, and religious leaders, including several NATO generals and one American citizen,
Mr. Wojciech Seweryn. Today – more than five years after the tragic crash - we still do not know the truth about the fatal flight and who is responsible for it because Poland's pro-Russian government handed over the entire so-called "crash investigation" into the hands of ... the Russian government!

It is imperative that the U.S. call for an independent international investigation of the Smolensk disaster because new scientific findings completely undermine the false claims published by the Russian Interstate Aviation Committee (MAK).

Prominent scientists and other experts, including Prof. Wieslaw Binienda, NASA scientist and Dean of the Engineering Department at the University of Akron, Ohio, and Prof. Kazimierz Nowaczyk, physicist at the University of Maryland, have shown that the Russian report contains false information, omissions, and conclusions that are not supported by hard scientific evidence. In fact, independent scientists (working closely with the Polish Parliamentary Team headed
by Polish MP Antoni Macierewicz) have recently uncovered that the Polish plane did not crash, but rather exploded
​in mid-air. Not surprisingly, Russian authorities deny that the plane exploded before it hit the ground.

Many astute political observers on both sides of the Atlantic suspect that the "crash" was indeed a political assassination. Russia and the pro-Russian government in Poland (headed by Prime Minister Donald Tusk) vehemently disagree. Nonetheless, the following facts speak for themselves:

1. Why did Russian authorities publish a false crash report?
2. Why does Russia refuse to return the "black boxes" and the plane wreckage to Poland?
3. Why did Russia falsify data from the plane’s TAWS (Terrain Avoidance and Warning System) computer?
4. Why hasn’t Russia begun to reconstruct the plane?
5. Why did the Russians contaminate and mutilate the plane wreckage and the crash site?
6. Why does Russia continue to propagate false and slanderous claims about the late NATO Gen. Andrzej Blasik and the highly trained Polish pilots who conducted the presidential flight according to air force standards?
7. Why did Russia falsify the autopsy reports of the victims of the crash?
8. Why did Russia invalidate the initial testimony of the air traffic controllers who were on duty at the time of the crash?
9. During the so-called "Russian-Polish investigation," why did Russia restrict and deny Polish investigators access to physical evidence?
10. Why was TNT found on the seat belt of one of the victims of the plane crash ?

Please help us and the people of Poland reveal the real cause of the Smolensk plane disaster by simply sending a short letter to your two senators and representative, the "Senate Committee on Foreign relations" and the "House Subcommittee on Europe and Eurasia" with your urgent request that they call on Congress to hold public hearings to reveal all of the new evidence uncovered by independent American and Polish scientists and researchers regarding the 2010 Polish plane crash in Smolensk, Russia. 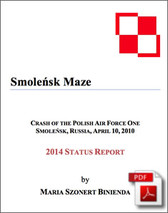 Early morning on April 10, 2010, the Polish Governmental Airplane Tu-154M (“Polish Air Force One”) departed from Warsaw, Poland, to Smolensk, Russia, carrying on board the highest level delegation of the Republic of Poland for the commemoration of the 70th anniversary of the Katyn Massacre. The official delegation consisted of the President of Poland, First Lady, all members of the Central Command of the Polish Armed Forces, parliamentary, government and Church officials, and representatives of the families of the Katyn victims. Upon entering the airspace of the Military Airdrome “Severny” in Smolensk, Russia, the Polish pilot made one reconnaissance approach to landing. At the decision altitude, he chose not to land and issued a command to “go around.” Seconds later, the Polish Air Force One crashed. The entire Polish delegation of the highest level perished less than a mile from the Severny Airdrome in Smolensk, Russia. All 96 people on board were killed; there were no survivors ("Smolensk Crash").

Within minutes of the crash, the international media announced that pilot error led to the crash of the Polish Air Force One. This irresponsible rush to conclusion stands in contradiction to a well-known rule that whenever the head of state dies in a plane crash the probability of sabotage is increased. This principle was proclaimed, inter alia, in the Russian response to the investigation of the 1986 crash that killed President Samora Machel of Mozambique. The history teaches that when the head of state dies in the airplane crash, invariably the sabotage is involved. The history also teaches that initial investigations of high profile plane crashes tend to be conducted under undue political pressure. Transparent and impartial in-depth investigations are possible only years later.

On December 19, 2010, Poland, acting as the state of operator and registry and the state that suffered fatalities of unprecedented significance, submitted its comments to a draft of the Russian final report. The Remarks of the Republic of Poland to the draft final report of the Russian Federation (“Polish Response”) pointed to a number of factual errors, omissions, misrepresentations and false premises in the Russian report. The Polish side also complained about the lack of Russian cooperation in the investigation by pointing out that Russia did not respond at all to 169 out of 222 Polish inquiries for information. Most importantly, in its remarks the Polish side requested ‘the reformulation of causes and circumstance” of the Smolensk Crash.