Pope Benedict XVI Congratulates Radio Maryja
on 20 Years of Faithful Service
TORUN - On Saturday, December 3, 2011 thousands of people from all over the world, including numerous bishops and representatives of Poland's most prestigious universities, gathered in the Shrine of Our Lady of Perpetual Help in Torun, Poland to celebrate the twentieth anniversary of the founding of Radio Maryja, Poland's most popular Roman-Catholic radio station. On this historic occasion, the Vatican's Secretary of State, Cardinal Tercisio Bertone, writing on behalf of Pope Benedict XVI, sent a four page congratulatory letter to Radio Maryja and its founder, Rev. Dr. Tadeusz Rydzyk, C.Ss.R. 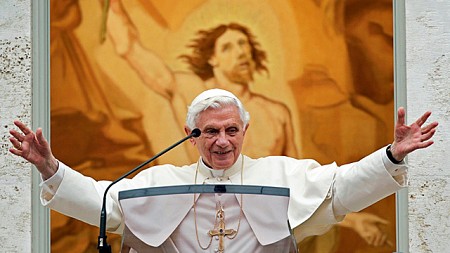 The Holy Father Benedict XVI, in spiritual communion with the participants of the ceremony of the XX anniversary of the Radio Maria, sends trough me to the Father Provincial a greeting and an apostolic blessing to the Founder and the Director of the Radio – Father Tadeusz Rydzyk, all the ecclesiastic and lay employees, volunteers and those who thanks to this catholic broadcaster strengthen their faith on their way to God.

Radio Maria was erected in Torun by the Bishop of Chelm, on the day of the Feast of the Immaculate Conception, 8th December 1991. During this rather difficult period of leaving the system that negated the freedom of speech and imposed the government’s monopoly in distribution of information, there was a necessity to create the new, catholic media that could reach everyone with the message of Redemption and with the reliable information.

Blessed John Paul II was thinking in this way. He addressed to you these words: “There is a great necessity to proclaim the Gospel in our Homeland. People are in a need of an authentic word. Word that builds and not divides, word that brings confidence to the anxious hearts. Word that is pure, simple, proclaims love and truth. The message of Redemption is that kind of word. This is Christ Himself. And you are the spokesmen of this Word”.

The Pope, your compatriot, confessed also: „I would like to say thank you to the Radio Maria for this diversified and generous engagement in the Apostolate of Word, which is today so important and so needed in our country”. He Himself entrusted your Radio to Mary’s protection. She is the chief patroness of the Radio, She is present in the words of all of you. I entrust your Apostolate to Virgin Mary’s protection. We venerate Her as the Star of Evangelization.

„Mary, the Star of Evangelization, please lead us, lead Radio Maria and be its protectress”. May Mary, the Star of New Evangelization, lead your Radio to the new people and new times. In this spirit of entrusting, thanks to indomitable will and fidelity with the Magisterium of the Church and with its Shepherds, Radio Maria could, despite of the difficulties, develop fruitfully its activity at home and abroad.

And with the seed of Word in the hearts of men, after 20 years of continuous activity on many levels, we can admit that the yield of the sow is abundant. In the first place on the waves of your radio, you can experience the encounter with God through prayer and catechesis. Two important elements that mark out the Catholic Radio from the other stations.

Every day is broadcasted the Holy Mass, Breviary, Angelus, Rosary, Chaplet of Divine Mercy, Evening prayer to Mary the Queen of Poland from Jasna Gora in Czestochowa, Prayer of the Immaculate Conception of the Blessed Virgin Mary and other prayers characteristic for different periods – as for example a penitential prayers celebrated in Lent (“Gorzkie Żale”).

Everyday catechesis is enriched by the presence of bishops. Inseparable attachment with the Holy See is manifested in the broadcasts of all the foreign pilgrimages of the Holy Father, the Wednesday general audiences, the "Angelus" with the Pope, the Vatican Radio news and the most important events in the Holy See and the universal Church. In addition, a weekly news from the Vatican Octava Dies is broadcasted, as well as the information service from the Holy Land - Terra Santa News.

The Pope Benedict XVI expresses his joy that, thanks to Radio Maria and related with it television Trwam, his apostolic journeys, Wednesday audiences and other events can be received in Poland in the native language. This is a clear contribution in bringing closer the Peter’s Mission in your country and among your countrymen who live abroad.

Not without significance is also the Christian social activity of your Radio. Known and religiously valuable is the community dimension of the Radio Maria listeners, families, youth and especially wonderful and unique phenomenon of the Backyard Rosary Circles of Children gathering about 150 thousand of children in the different parts of world who express their love for the Mother of the Savior through the regular, everyday Rosary.

Thinking about the formation of young people and for the sake of the Catholic journalists, already for 10 years in Torun has existed the School of Social and Media Culture. The press dimension of journalism represents a well-known in Poland daily journal. Radio Maria also pilgrimages through its homeland transmitting the Holy Mass and other celebrations from many sanctuaries in the dioceses and parishes. It also follows the events of the Church in Poland. Radio Maria listeners are on the pilgrimage tracks to Czestochowa, Rome and the American Czestochowa in Pennsylvania.

The specificity of this radio lies also in the fact that anyone can take part in an open discussion program "Unfinished Conversations", participating by the telephone in the live program. There should also be mentioned the scientific, cultural and social environments gathering around the Radio Maria and supporting clearly the moral teaching of the Catholic Church, defending life from conception to natural death and defending the family founded on responsible and God-blessed union of a man and woman and the Christian education of children.

The mentioned above forms of religious influence on the masses of listeners, especially the people with disabilities, the sick, the advanced in years, who cannot participate personally in the pastoral programs in their dioceses or parishes, are a genuine contribution to the Mission of Evangelization of the Church in Poland and harmonize with the path of the New Evangelization traced by The Magisterium of the Church.

Finally, I would like to quote the words of the Pope, your compatriot, Blessed John Paul II, addressed to you during one of the pilgrimages to Rome: "May your Radio be on service of the true information, fulfilled with love and based on justice. May it contribute to the formation of human consciences in the spirit of the teaching of Christ."

The Holy Father Benedict XVI, thanking you for the 20 years of the generous Mission of Evangelization, asks God through the intercession of the Holy Mother, Patroness of the Radio Maria, that this Cause of permeation of faith to the human consciences, guided by the Redemptorist Religious Order in Poland and abroad, results in a permanent victory of good over evil and brings good to the many Christians and to all of your country. In this spirit, I share your joy and I salute all the participants of the ceremony and the listeners. 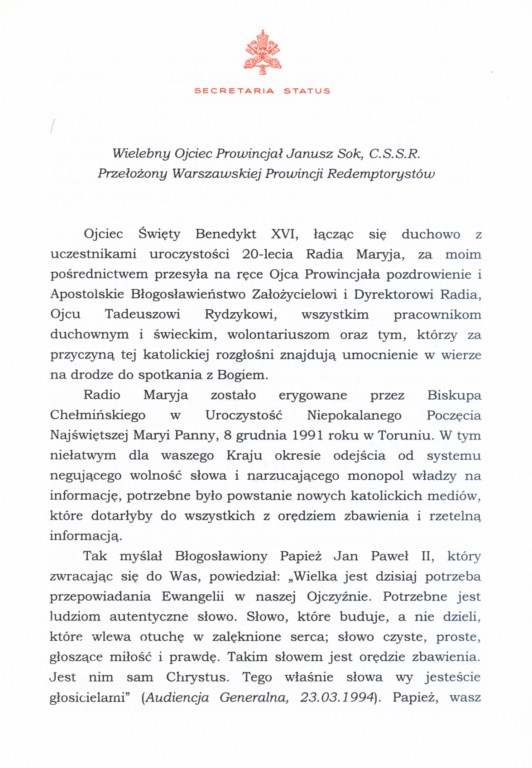 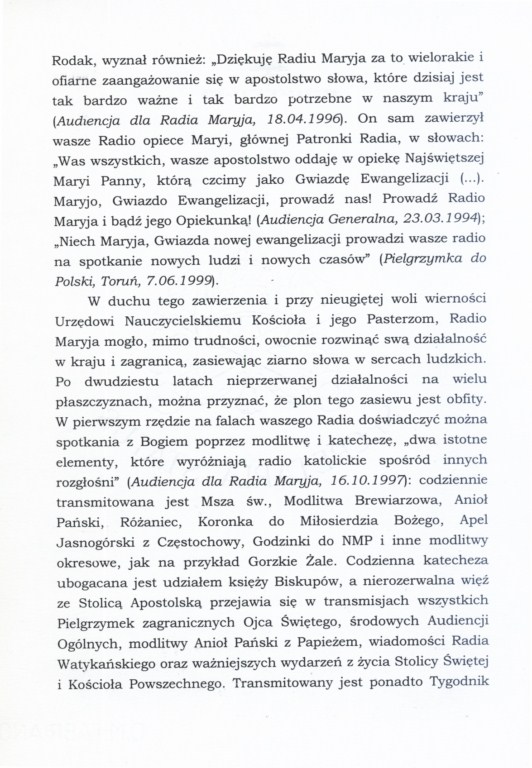 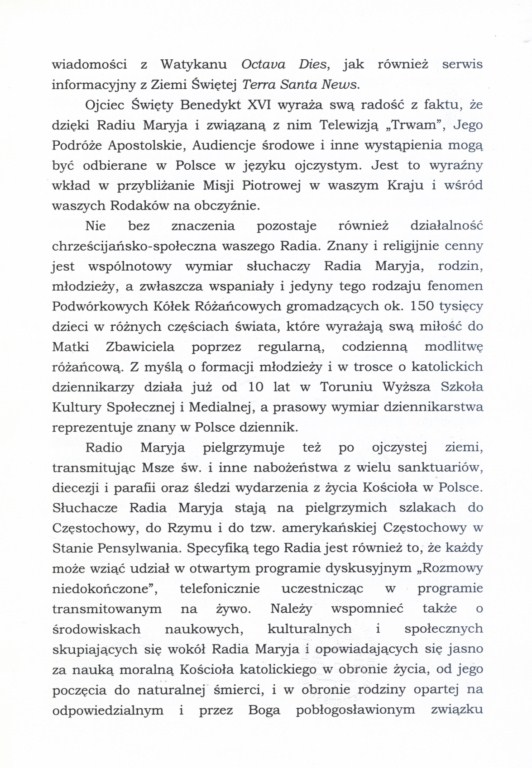 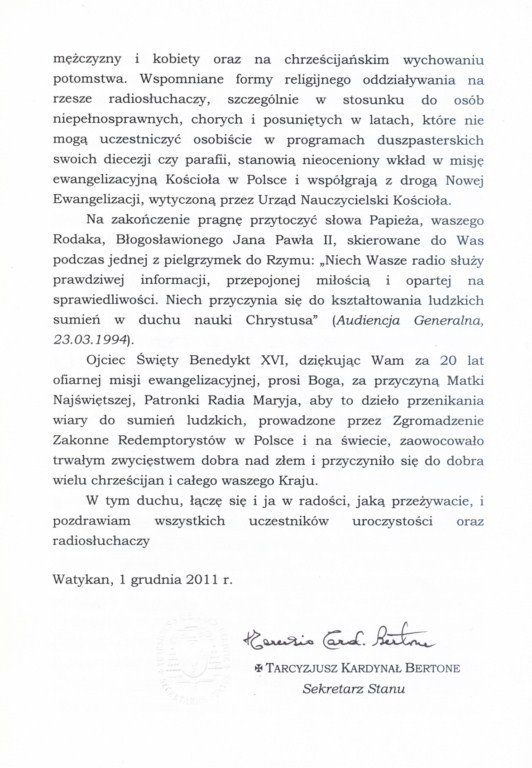