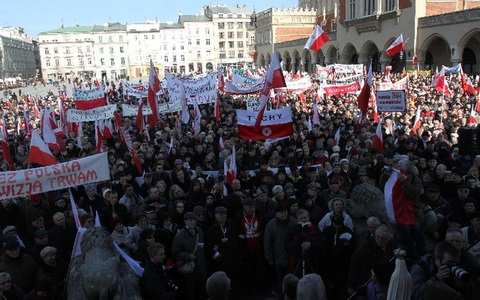 Hundreds of thousands of Poles protest all over Poland in defence of media freedom.
Over 1.9 Million Poles Protest in Defense of Media Freedom in Poland including protests from:
- The Highest Authority of the Catholic Church in Poland (The Polish Bishops' Conference)
- The Helsinki Foundation for Human Rights
- "Solidarity" Trade Union
- Close to 50 Chief Editors of Major Polish Newspapers, Magazines and Independent Media
- Hundreds of Non-Governmental Organizations, Intellectuals, Journalists and other Civic Organizations
- Tens of Thousands Around Poland Marched on the Streets in the Defense of Free Media in Poland.


Elected by the ruling party the Civic Platform (PO), the post-communists (SLD), and President Komorowski, the Polish Broadcasting Council refused to grant license to Catholic TV Trwam despite its multi-million viewer base, long-term presence and excellent financial standing.

The decision raised questions in the light of the fact that broadcasting licenses were granted to newly-created corporations with no assets, ones that never aired a single program before or had a single viewer, and whose only capital consists of highly leveraged, risky, one-year loans.

Some commentators state that this action of governmental suppression of independent media echoes the dark years of soviet-imposed communism in Poland between 1944 -1989.

The Helsinki Foundation for Human Rights drew attention to the international standards governing the licensing regulations of broadcast operations and called for compliance with the principles of media pluralism.

Polish Bishops see the exclusion of the station broadcasting religious programs as a violation of the principles of pluralism and equality before the law, especially since the vast majority of Polish citizens are Catholics and should be assured unhindered access to the programs of catholic TV Trwam over the modern digital television system.

During World War II, many priests were deported, sent to concentration camps and gulags, and executed by Germans and Russians in an effort to wipe out Polish identity. After the war, many Catholic priests were killed by the Polish communist internal intelligence agency (SB) for defending democratic values. http://www.youtube.com/watch?v=oXTSy5xYUIA

In the dark years of the communist occupation, church was a place where Poles could gather to hear the truth.Â  The Pope's visit to Poland in 1979 sparked the national independence movement by giving people the confidence to stand against the oppressing government.Â  The Church supported "Solidarity".

More supporters of TV Trwam voice their outrage at the refusal of Polish Broadcasting Council to grant broadcasting license to the Catholic TV station.

Protest letters demanding to overturn the decision not to grant license keep flooding offices of the Polish Broadcasting Council and its chairman, Jan Dworak.
Over 1.9 million TV Trwam supporters have already signed the letters.

The media community in Poland is also calling for a review of the decision not to grant broadcasting license to TV Trwam in an open letter signed so far by close to 50 chief editors of major Polish newspapers, magazines and independent media sources.

On January 16, 2012, the highest authority of the Catholic Church in Poland, the Polish Bishops' Conference, called on the Polish National Broadcasting Council to reverse its decision refusing a broadcast license to TV Trwam, a well known and successful Catholic TV station in Poland.

Tens of thousands of protesters gathered on Saturday, February 18 in front of the Polish Parliament and Presidential Palace in Warsaw, in defense of media freedom in Poland and in protest against discrimination of TV Trwam in the licensing process.

On Sunday March 4th tens of thousands of Poles protested in the streets of Krakow.
-----


Statement of the Permanent Council of Polish Bishops Conference Regarding Refusal to Grant Digital Broadcasting Rights to TV Trwam
The Permanent Council of the Polish Bishops Conference emphatically appeals for a change of position by the Polish National Broadcasting Council (KRRIT) in the ongoing process of licensing, in order to grant TV Trwam a place (broadcast frequency) in the digital broadcasting multiplex.
The exclusion of a station with a religious orientation violates the principles of pluralism as well as equality under the law, especially since most of the citizens of our country are Catholics. They should be assured free access to the programs of TV Trwam in our digital television system.  Numerous viewers, among them many ill and lonely persons, expect to continue to be able to watch Catholic programming.
We trust that TV Trwam, which has been broadcasting for over eight years and demonstrates financial stability, will be included in the digital television system of Poland.
Â (signed) Members of the Permanent Council of the Conference of the Polish Episcopate,
Warsaw, January 16 2012
Sources: